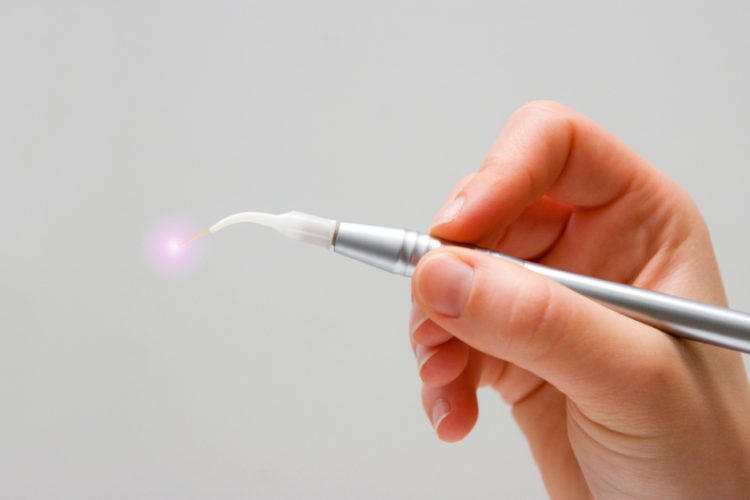 Fifty percent of Americans have gum disease, according to the American Academy of Periodontology. It often begins when poor dental or hygienic practices lead to plaque forming along your gum tissue, eventually hardening into tartar.

Over time, this tarter leads to Gingivitis, an early periodontal disease characterized by red, inflamed gums that bleed when you brush or floss your teeth. Left untreated, Gingivitis can evolve into Periodontitis, where the gums develop deep pockets between the tissue and supporting bone structure, eventually leading to tooth loss.

The best way to treat Periodontitis is to manually remove the infection and seal the periodontal pockets. For most dentists, that involves surgery and sutures. But now, the Periolase Dental Laser provides a less invasive, patient-friendly approach to treating severe gum disease.

How Does the Periolase Dental Laser Work?

The Periolase Dental Laser relies on a tiny laser fiber – approximately the thickness of three hairs – which is inserted between the tooth and the gum to clear away the infection. Here’s the six-step process behind it:

2. Probe for pocket depth – A Perio probe indicates the depth of the pocket(s) between your gum tissue and the tooth.

3. Laser irradiation of infection – A laser opens the pocket for access and visibility before selectively destroying the diseased tissue. Meanwhile, tiny vibrations alert the doctor of important dental conditions, such as root roughness.

4. Remove tooth accretions – An ultrasonic scaler and hand instruments are used to remove any infectious buildup remaining on the tooth between the pocket.

6. Seal tissue against root surface – The tissue is compressed against the tooth’s root, forming a stable clot between the tooth and gum tissue.

The procedure is relatively fast compared to surgery, taking two, two-hour sessions to complete (your dentist will treat half of your mouth at each session). It’s also much less painful than surgery. In fact, many patients feel good enough to immediately return to work after the procedure.

Plus, because the procedure doesn’t involve any incisions, you won’t have to worry about bleeding or sutures.

Are You a Periolase Candidate?

In general, the Periolase Dental Laser can treat any periodontal infection that would otherwise require surgery.

If you are interested in undergoing the procedure, please contact us to schedule a preliminary consultation. We’ll further explain the process behind the laser and give you a demonstration. Then, we’ll take x-rays to make an accurate diagnosis and determine the degree of your infection.